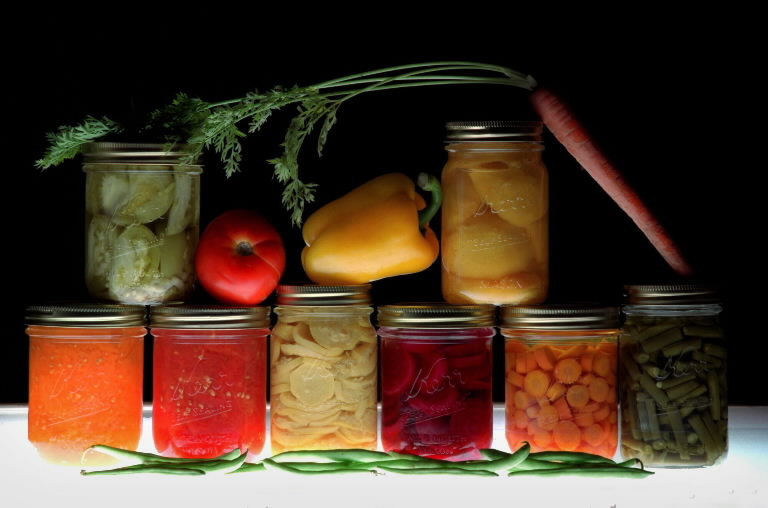 The biggest advantage of choosing canned produce as opposed to fresh is financial. Cost analyses have shown that canned vegetables can be as low as one-fifth the price of fresh options, and half the cost of frozen. This is especially helpful when buying produce outside of its local growing season, like corn (a summer vegetable here in the U.S.) during the winter. Even though some fresh produce can be purchased outside of the local season, it is typically more expensive, as it would have to be imported. Opting for canned food can therefore reduce grocery expenses, especially during the winter when fewer fresh options are available.

In addition to cost, canned vegetables are able to be stored at room temperature and have a much longer shelf life than fresh versions. In this way, buying canned vegetables can help you plan meals in advance.

While fresh fruits and vegetables do generally contain the most nutrients, it is important to remember that they are often transported over long distances and then sit on the shelves of grocery stores until purchased. This long time difference between harvesting and eating means that some nutrients can be lost as they are exposed to light and air. Canned veggies are picked and processed at peak ripeness, when nutrient levels are at their highest. It’s not well known, however, what the effect of this truly is. The Food and Drug Administration (FDA) has reported that nutrients in fruits and vegetables are generally not lost during canning or freezing, and that fresh, frozen or canned versions of the same food have relatively equivalent nutrient profiles.

One of the disadvantages of canned vegetables is that some have less appealing texture when cooked, or a different taste compared to fresh options. Some canned vegetables have a softer texture due to sitting in canning liquid.

Nutritionally, the downside of buying canned produce is the sodium that is sometimes added as a preservative. High intake of dietary sodium can lead to high blood pressure, which raises the risk for heart disease. Fortunately, many brands provide options that do not have added salt. Simply look for “no salt added” on the label, or scan the ingredient list to make sure salt has not been included.

One of the controversies surrounding canned vegetables is the containers that they come in. Cans and plastic bottles are often lined with bisphenol A, or BPA, which has the ability to leech into the food. In large doses, BPA can act as the hormone estrogen and may be linked with an increased risk of some cancers. The human research so far has not been conclusive, but if you are trying to avoid this chemical, choose glass containers instead.

Another downside of canned vegetables is that they can lose some nutritional value over time, particularly water-soluble nutrients like vitamins B and C, that are drawn out from the vegetables into the canning water.

Overall, fruits and vegetables are a vital part of a healthy diet as they provide numerous vitamins and minerals. Canned vegetables are a convenient, inexpensive way to boost intake of these beneficial foods. Adding more plants to your diet is advantageous no matter what form, so if buying less expensive canned vegetables increases your intake, it’s a positive choice.