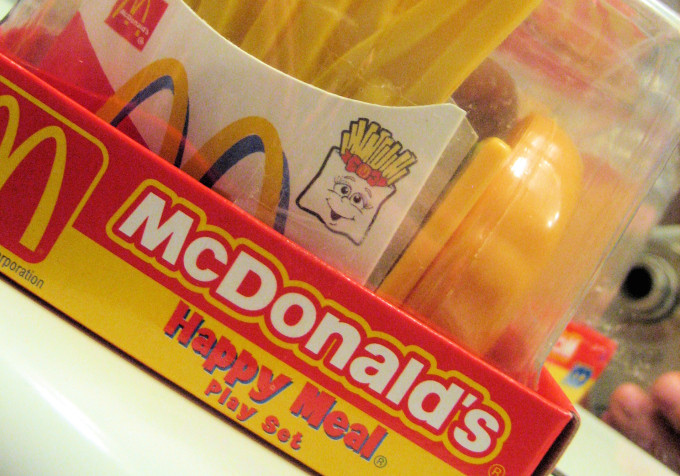 McDonald’s has long been criticized for using toys and other incentives in Happy Meals to get young kids craving fast food. But could the same “prize included” approach be used to encourage adults to eat smaller portions?

New research from the University of Arizona’s Eller College of Management suggests that the “Happy Meal Effect” could be used to incentivize adult consumers to purchase more health-friendly food options.

Eller’s Martin Reimann, along with Antoine Bechara and Deborah MacInnis of the University of Southern California, performed a number of experiments to find out if offering a non-food bonus with a menu item was enough to steer both kids and adults toward an option that was not as filling as an offering without the bonus.

When a group of sixth-grade students were presented with the option of a full sandwich and no prize or a half-sandwich and a pair of cheap bud-style earphones, 78% of them went for the smaller sandwich.

Kids were even more likely to go with the prize-included half portion when the food in question was something youngster-friendly like chicken nuggets or cookies.

The researchers found that you only need to present the opportunity for a prize to get people to select the smaller portion. They presented university staff and students with a choice between full lunches without any sort of incentive, and half portions that included only the chance of winning a $100 gift card or 10,000 frequent flier miles. Even just that hope of winning a prize was enough to steer a significant number of adults to the smaller portion.

The likelihood of people to pick a half portion with a non-guaranteed prize was affected by several things. Researchers say that when test subjects knew the odds of winning a prize (even if the odds were good), the Happy Meal Effect wasn’t as strong as it was when subjects merely knew that a prize could be won.

The dollar amount of the potential prize was also a factor that could sway results. Researchers say that the likelihood of choosing the smaller portion grew exponentially as the value increased from $10 to $50. However, there was little difference between the results for a possible $50 reward and a possible $100 prize.

Perhaps most importantly, the research found that test subjects who opted for smaller portions were not later eating more to account for the fact that they didn’t each the larger portion at lunch.

Reimann suggests this sort of incentivizing might be a way for restaurants to encourage smaller portion consumption while avoiding regulatory and legislative efforts to rein in consumption of high-calorie foods.

“If non-food rewards, even small and uncertain ones, can be just as engaging at a neurochemical level, then restaurants can potentially motivate healthier choices without jeopardizing sales, and consumers have more paths to avoid overeating,” he explains.