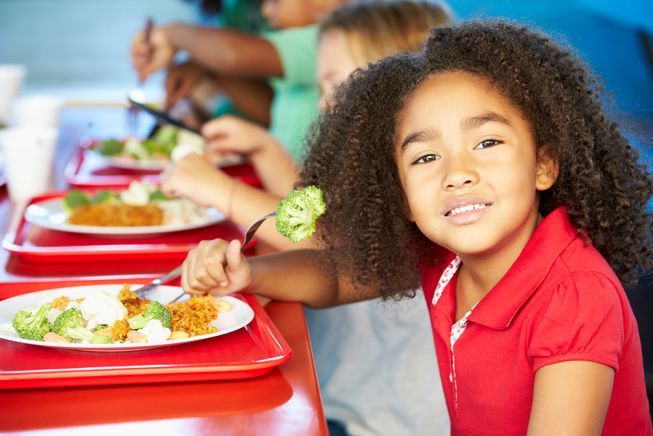 While students around the country complain about their school lunches, students who attend schools within Sausalito Marin City School District are bragging about the meals on their plates. This year, the district became the first in the nation to serve 100 percent organic lunches.

Around 500 students at Bayside MLK Jr. Academy and Willow Creek Academy have been enjoying lunches that are organic, GMO-free, and made with ingredients that are 90 percent sourced locally. The school district first launched the organic meals as a pilot program in 2013 in partnership with Turning Green, a Sausalito-based non-profit formerly known as Teens for Safe Cosmetics and Teens Turning Green.

Turning Green launched the Conscious Kitchen program in Sausalito schools with the goal of serving fresh, local, organic, seasonal and GMO-free breakfast and lunch to students every day. Along with the meals, the participating schools have incorporated gardening and nutrition programs into their curriculum so that schools learn where their food comes from, and why eating healthy foods is so important. Students also work with each school’s head chef to plan menus, develop culinary skills, and offer feedback about the meals provided.

So what do the kids think about their 100 percent organic meals?

“The results speak for themselves,” said Steve Van Zant, superintendent, Sausalito Marin City School District. “Since launching the pilot at Bayside MLK Academy in 2013, students are eating real food for breakfast and lunch, discipline cases have dropped dramatically, attendance has improved, food waste is down, and students and teachers sharing of meals has led to improved manners and open communication, greatly enhancing the school community.”

According to Turning Green, there has been a 67 percent reduction in disciplinary cases, an increase in daily attendance, and reports from teachers about improved behavior and communication between students since the pilot program was launched.

Here’s what the teachers, chefs, staff and students think about the Conscious Kitchen program:

Wouldn’t it be great if kids all over the country could get fresh, seasonal, organic, local and non-GMO foods at least once every day?